Sandy thrust open the church door, impatiently swiping at telltale tears. Spying her car, she broke into a jog. As her trembling fingers missed the "unlock" button for the second time, she whispered, “Oh God, how? How can You expect that of me right now?”

Hearing the click of the lock, Sandy threw open the door and flung herself into the seat. The tears began to flow freely as she sobbed “I can't... I just can't.”

Conversations about forgiveness draw me back to when Linda Strom and I first met Peggy Kurtz. We had come to hear Peggy’s forgiveness story as research for the book Set Free: Life and Faith on Death Row.

Peggy began, “Forgive my tears. The mind forgets but the heart remembers.” She wiped away the tears. “My little brother, Jerry, was my buddy. He lived with us when he got out of the Coast Guard. Those were such good times.”

Her crying began to intensify. Bowing her head, she prayed, “I am healed, I am healed.”

She took a breath and continued. The phone call had been shocking. Those responsible for her brother's murder were unknown. Grisly details played nonstop on the news.

And I could not imagine. Still can’t.

“I thought if I heard one more detail I’d go through the roof. One morning my husband said, ‘Peggy, you’ve got to get a handle on your life.’”

“On the way to work, I asked God to relieve me of the rage. Walking into church later that week my pastor said, ‘Peggy, we want to pray for you.’ People gathered and he encouraged me, ‘Just lift your hands, put your anger, your bitterness, all the bad dreams into them, give everything to the Lord.’"

“I was so ready. I couldn’t work, sleep, eat. It was constantly on my mind."

I whisper back into time. You were traumatized, yearning for relief from tormenting images.

“So I prayed ‘God, make a way for me. I forgive whoever did this.” Later I discovered Karla (Faye Tucker) and Danny (Garrett) were arrested that night. Now there were faces and my rage started all over again. I felt like I was in prison. But I refused to be there with them. I would not let my mind go back to being consumed with the crime details. So, instead, I began praying for their salvation.”

Short, choppy sentences between sobs. Her eyes locked with ours. “God set me free and what God has freed is free indeed. I’m still free.”

The pain flashed across her face. “I loved that boy... so much. That Sunday morning I wondered what brought Karla to brutally take another person’s life. Jerry could have been anybody that got in her way. Every time I saw a news report it triggered a memory.”

“I didn’t want hate to consume me. And I told the Lord… if He made it possible, I’d tell Karla.”

Weeks later, Peggy received an unexpected opportunity to talk to Karla by phone.

“I couldn’t stop trembling. My husband held me on his lap while Karla told me how sorry she was, and then I told her... I forgave her.”

Through the trauma lens I see you trembling. How grateful I am for your husband’s safety.

Forgiveness costs. "Forgiveness is the fragrance of the violet which still clings fast to the heel that crushed it." We remember, right? Each time we look up at the cross where our blood-drenched God squirmed and trembled.

With every appeal, prior to Karla’s execution, newspaper articles and television interviews detailing the crime flooded the news. Regarding one particularly difficult round Peggy said, “I couldn’t bear to work and walked around saying, ‘Wait a minute, God, I’ve forgiven her. You said when Christ shed His blood, it covered everything.’ But my initial decision to forgive became my anchor, one I came back to time after time.”

As our time together drew to a close, Peggy whispered, again imploring us to understand the impossible.

“You know what I miss most? Karla’s prayers. I didn’t just lose a brother, I lost a sister. I wanted to get to know her. But other than our letters, the Lord seemed to say it wasn’t the time. But I will... in heaven. Then we can share all we want and neither of us will feel any of the pain or shed tears.”

Peggy’s impossible forgiveness story speaks to partners by reminding us:

Donna is the founder of, A Door of Hope — an organization that trains women (who've been there) wishing to run support groups for wives/partners of sex addicts. 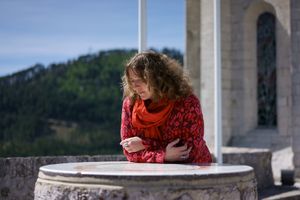 A Time to Forgive?