However about a year later the journal posted an excellent article by Dr. Kevin Skinner, including the results of his own study in this area. Dr. Skinner – had conducted the largest study on partners of sex addicts and concluded:

“When a spouse acts out sexually, more than half of those who responded to the survey felt unsafe and experienced intense fear.”

This fear, he goes on to argue, is all part and parcel of the “relationship trauma” we spouses have undergone, and may still be undergoing if he is continuing to act out, lie and hide, or if there is abuse tied in with his addictive behaviours.

Almost every aspect of our trauma is tied into fear. Fear symptoms include (taken or adapted from the DSM):

Skinner noted that “more than half” of his respondents reported feeling fearful. As you can see from the results above (from my survey conducted only on women, not husbands or male partners of sex addicts) fear, in some form, shows up in the vast majority of us. In many cases the fear is to the point where it is making life very difficult. Said one respondent:

“I have had three severe anxiety attacks. After the first one was witnessed by my children, I began to keep a paper bag in my nightstand drawer.”

Debilitating fear is truly awful. As you work on healing (processing your pain with safe people, good self-care) the fears should slowly subside. Understand, though that this is the work of months (possibly even years), not days. (More on this next week).

If your husband is in recovery and really engaging it, this will help you overcome your betrayal-related fears. If you leave a recovery-resistant husband: same thing. If, however, you are trying to live with a husband who continues to act out, lie, hide, minimize, rationalize, blame, act in, etc., your own healing process is going to be continually damaged on multiple fronts—but especially on the fear front.

Now the original bomb that went off in our life was almost always out of the blue. It wasn’t a self-fulfilling prophecy because we never thought “that this would be my story.” (To quote the lovely Shelley Martinkus.)

However, the fear of further bombs is a slightly different matter. A bit of knowledge changes the game. A bit of healing can move us out of “What if…” (which is always a projection into a catastrophic and godless future where we are victimized again) to “If you…, then I will act to protect myself”, i.e. boundaries. Add to boundaries a growing understanding of what God means when He say, “I will never leave you,” and hope, or at least determination, begins to replace fear.

Next week, I’ll look more closely at what helps us break free of a life of fear… and what doesn't. 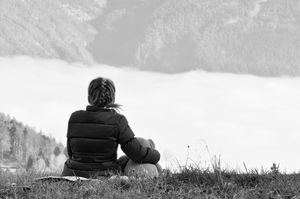 Betrayal: What we Fear