I'm going to explain it in this post in the hope that it will help you or someone in your life to move forward faster than my husband did... and yes, faster than I did as well (note: my defence was a reaction to my husband's betrayal, but it went on well after he had started to become safe).

By the way, if you've identified your husband as being intimacy anorexic/averse or narcissistic, you can be fairly certain he's defended against vulnerability.

If you're able to read this blog post in the language I'm writing it in (English) that means you probably live in what's referred to as the Western World (or your culture is influenced by it). While there are many different people groups (racial and ethnic) in the Western World, there are certain cultural commonalities we share. Amongst these is a belief that weakness—particularly in men—is bad. Real bad.

Those with physical or mental weakness are "less than," those with emotional weakness are (take your pick) a sissy, a baby, a coward, a weakling, a loser, or useless. This cultural message sets men up to defend against vulnerability... that is to work hard to keep others from detecting any emotional weakness. Many of them have learned from experience that to show weakness (i.e. express sorrow, disappointment, uncertainty, empathy) is to risk being shamed, ridiculed, exploited and rejected by others... especially by other men.

However, being defended against vulnerability wreaks havoc on us when we're faced with negative emotions like frustration, anxiety or grief. In the chart above (compliments of Dr. Ruth Lawson-McConnell who adapted it from Gordon Neufeld) you will see that when the negative emotion frustration (or anger) enters our emotional world (pictured here as a traffic circle), the first "off ramp" for it is in creating change. However, sometimes the "exit" to change is blocked... because change is futile. The next best exit for our frustration is then tears and grieving. The grieving exit leads to adaptation. However, if we are unable to grieve because we are defended against vulnerability then we don't adapt and instead we move to the next exit... "attack." Attack may take the form of "other attack" (including displays of open hostility or withdrawing) or self-attack (including going into victim mode or a state of self-critical depression).

It's not just his own vulnerability

I've heard numerous heartbreaking stories over the years of men not just defending against their own vulnerability... but also their wives'. Thus when they are confronted with their wife's illness (physical vulnerability), sorrow or tenderness (emotional vulnerability), etc., they react strongly... and negatively, usually with one of the forms of attack listed in the diagram above. Sometimes the attack is followed by an unhealthy coping mechanism such as acting out. Sometimes the attack IS the acting out.

Now few sex addicts have any idea what's going on for them when they react this way. It takes some recovery work for a person to be able to:

When we live with a person who is not safe because he is defended against vulnerability, it's normal—and in many situations, wise—to keep our vulnerable emotions to ourselves. However, trying to live permanently shielded will not serve us well in the long run. At some point we will be vulnerable... and that should be ok.

In fact, it should be more than ok. In a healthy relationship displays of vulnerability are respected, cherished and cause us to work to defend the vulnerable one. When this is the response, intimacy results. Such is the godly approach to vulnerability. Scripture tells us God pays particular attention to the vulnerable (e.g. widows and orphans). Our God is the one who

...will not crush the weakest reed or put out a flickering candle. He will bring justice to all who have been wronged. — Matthew 12:20

Jesus modelled vulnerability by displaying his negative emotions openly and by opening his arms wide (a physical posture of vulnerability) allowing his hands to be nailed to a cross, for the sake of love. There he cried out in grief and pain, yet persevered because he perceived we were more vulnerable than he himself. We were lost in sin and lies, destined for a future of eternal disconnection.

Coping with negative emotions through addiction (or by "attack") will keep us safe, but disconnected and unable to grow and adapt. It's only as we practice vulnerability that we can enter into "the riches of His glorious inheritance in His people" (Eph. 1:18)... including the riches of connection with God and others.

The good news is that God himself can help us (addicts and betrayed wives) learn to let go of inappropriate defences. 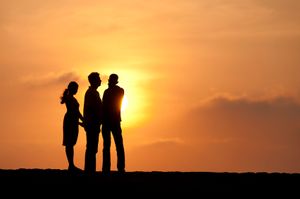