One of the respondents to the 2015 Spiritual Crisis survey wrote:

“After 13 years of fake recovery, I left him and had two churches turn against me because they believed him… I’m considering joining a bar instead of a new church.”

So many of us, after barely surviving the pain of betrayal, find we then have to endure the abuse of other Christians. This is a tragic assault on the wounded. A tragic failure on the part of the church. However, it isn’t a failure on God’s part. He is still there for us. He longs to comfort us at this time.

Over the years I’ve seen so many women confuse God with the church, and make the heartbreaking decision of walking away from Him… rather than just “them.”

It’s an easy enough position to take. The church is supposed to be His Body… right? But we need to consider that not everyone who walks through the doors of a church building is His representative. Even the guy at the front (and those that put him there) don’t always represent Him. Even the good leaders have times when they’re off base.

Leave… but not “Him”

Just as I don’t think God was all that phased by me shaking my fist at Him at times (in my pain), I don’t think he’s particularly scandalized when women leave the church because of the abuse they’ve taken.

He gets we’re in pain… and scared that if we stay there’ll just be more. He wants us to be safe. He wants to show us that even if the church is scary… He’s not. He’s awesome. He’s majestic. He’s just, AND He’s gracious, compassionate and merciful. Even if we’ve behaved badly in our pain (and if you've read Beyond Betrayal, you'll know I'm in that camp) , He’s still for us. Guess what? Despite frequently behaving like a bad Christian, my relationship with God has never been better.

So, do leave for a time (or permanently) if you are being blamed, shamed, criticized manipulated or controlled. Check out other churches if that feels safe. Or, just pray God brings you safe fellowship some other way. Most of us who have left an abusive church find, in time, that God brings other supportive Christians into our lives.

And being outside our usual denomination sometimes means we’re more open to a friendship with a sister we might not have associated with before the crisis. One of my first close Christian friends, (after leaving a second, unsupportive church) was Catholic. I’d been raised a Baptist.

Since my horrible spiritual crisis on leaving my first husband, I’ve had long spans outside of any particular church body, and I’ve had years inside. I’ve attended house churches, home groups, and alternative churches. I've also done “home church” with the family for extended periods. And most of the journey I’ve had beautiful, life-giving fellowship: both with other sisters on this journey and with those who have no clue what it’s about.

In Part 1 of our interview, Coach Katherine (A Circle of Joy) and I talk more about the need to have our own walk with God. We even toss around the idea that having a personal relationship is what’s needed to get the good bits out of church (and give more good)… and ignore the “not so brilliant bits.”

As the ex-wife of a former pastor (who was imprisoned for sex offending), Katherine has an enormous story of betrayal and loss. However, she has an even bigger story of drawing close to God and overcoming. Is hers “a success” story? Someone once told her it wasn’t… but I think it is.

What do you think?

BTW, if like our survey respondent above you've had problems with your church believing your spouse's story (about his addiction/the relationship) and not yours, remember that we posted information for churches—from a long-time counselor in this field—just a few weeks ago.

In the next post, I’ll be sharing more about what we learned from the Spiritual Crisis survey. I’ll be switching the focus, however, to how the crisis has caused women to (ultimately) draw closer to God… and overcome.

Spiritual Crisis... and Moving Past 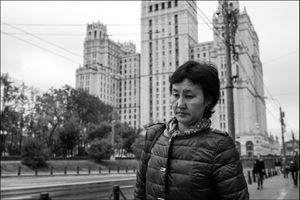