The Celibate (with Sex-Addict) Marriage

This week author Briar Whitehead concludes our three-part series on same-sex attraction sex addiction with thoughts on "the celibate marriage."

Obviously there are many wives of sex addicts who are living in a celibate (or near celibate) marriage, regardless of whether their husband is attracted to men, women, or both. As one of the respondents to the 2014/2015 Survey of Wives of Sex Addicts stated: "He has not touched me in 15 years. I am living a lie. He is not a man of integrity."

To those living in this kind of situation, I hope you find comfort and food for thought here.

Marriage is a sacred and precious thing. It is meant to reflect Jesus’ astounding and abounding love for his bride. That’s why Paul calls marriage a shadow and a mystery. Jesus is poured out for his bride-to-be. She came out of his side. He is outrageously in love with her. He can’t wait for the consummation. He woos her with eternal patience and tenderness and longing. Following this pattern, male is to unite with female to become one.

That’s the glorious pattern, the heavenly model, but it can seem a million miles away from our daily realities. However, it has something very important to say to us who are made in the image of God.

In my view, there does come a time when it becomes blasphemous to say that the relationship we have with a partner whose heart is not ours, whose face doesn’t light up when he sees us, who is sexually acting out regularly — either homosexually, bisexually or heterosexually — and is very ambivalent about stopping it, is any longer a marriage in God’s eyes. Yes, Christ does wait for his bride and we are intended to extend to each other forgiveness and patience as we are being restored. But we extend it to those who want restoration. Christ wants his bride, he loves her so much he would die for her — and he did. He is faithful to death. He gives himself to her every moment and can’t wait to be one with her.

A marriage with a partner who prevaricates for years about the business of transformation into that image is bringing the marriage into a state of non-existence that, I believe, frees a woman to cut the ties.

I speak very carefully here because these are sacred things. But I see too many in the church following rules and formulae and trying to be whatever they think a Christian should be — all of which can lead to religious servitude, exhaustion and despair, not freedom. We are to be free to hear the Spirit and be led by Him. Marriage is not a call to martyrdom, it’s a call to intimacy, oneness and wholeness in all senses of the word. A celibate marriage — unless in exceptional circumstances, including HIV issues — is not a marriage. As Jesus penetrates our hearts to make us one with him, so sexual intimacy is part of its reflection. If this is impossible, intimacy can be enjoyed in other ways but there must be a heart for it — or there is not a marriage.

Sometimes separation is necessary to shock the indifferent party into awareness of outcomes. Sometimes divorce is necessary because separation has merely revealed what was there all the time, and he has already gone looking elsewhere.

If a marriage fails, it’s not the personal failure of those who truly wanted it to succeed. We haven’t let God down. We haven’t failed to be Christ-like. It’s more likely we have been liberated from bondage to a destructive relationship and a set of religious requirements that we mistook for truth.

But if it fails, we need to heal, and there is no other place to do that except in the arms of God through the saturation of our inner beings in his love. We need to give ourselves plenty of time. And healing will almost certainly lead to a growing awareness of any fatal chemistry that took us into the relationship in the first place.

If you would like to share with the community your experiences with a husband with same-sex acting out, gender dysphoria, and/or your experiences regarding being in a celibate marriage, but want to do so anonymously, I'd love to hear from you. Masking the Pain of Betrayal 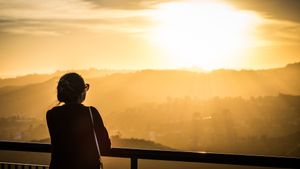