• 84% of these women initiated the separation

• 52% of them were still separated or divorced (8% remarried)

• 57% were still raising children at the time they separated

Last week’s post demonstrated how separated and divorced women face numerous hardships. This week, however, we’ll look at what women explain are the “upsides” to leaving their sex addict husband.

The number one way life improved for our separated survey respondents was “peace.” Years of constant stress and trauma-related fears take a toll on us mentally, emotionally, spiritually and even physically. Said one survey respondent:

“It [my life] has improved because I am not having to live with the constant triggers and lies. I feel more peaceful.”

Peace should ideally be more than just the absence of danger, however. Not that there’s anything wrong with getting away from a (physically, emotionally, or spiritually) dangerous situation! However, true peace comes from The Prince of Peace. Connecting with Him, and pursuing healing and growth, is how we move into something longer lasting.

Said one respondent, who initially suffered a great deal emotionally when she and her husband split up:

“My quality of life has improved since separating from my husband in many, many ways. But during the first year, I felt very depressed and guilty. Even so, being on my own allowed me to grieve as I needed to and look carefully and clearly at what was true about our marriage. Now, eleven years later, I am far less anxious than I was when I was married. I did a lot of therapy that has helped me to forgive him and see the wounds and issues I have. I do not live in fear that he will be angry with me or that he will look at pornography, or cheat on me, or drink too much. My life is calmer and more stable. I have a much healthier, realistic view of men.”

Of the survey respondents who were single, 52% hold out a hope of reconciliation with their sex addict husband.

Dr. John Townsend (of Boundaries fame) talks about the healthiness of balancing “the hope of reconciliation” with “moving on with our lives.” The reality is that anything is possible with God (even our husband’s transformation), so there’s always hope.

A number of survey respondents had happy tales to tell along this line.

“When I suggested we stay separated, and my husband realized he stood to lose it all, he came to true repentance, was broken, and the Lord saved him. It began a new phase of healing and redemption in our relationship.”

“During the first month or two of our separation he was very angry with me, but mid separation we started to reconcile. The separation helped me for it gave me time to think and heal some.”

As discussed in other blog posts, spiritual growth can absolutely be part of our journey of healing from betrayal trauma. This was just as true for those who left the marriage as for those who stayed. Said respondents:

“I was led to the addiction by God and consistent prayer. I felt God was watching over me throughout the entire ordeal including the decision to separate and ultimately divorce… [this process] brought me much closer to full reliance on God and his direction.”

“I am happier, healthier (mentally, emotionally, spiritually, physically, financially) and my most important relationship is with God and myself now and I know that every other relationship flows from there.”

Next week, that wonderful wise woman (and sex-addict-partner coach), Donna Meredith-Dixon will talk about the phases of betrayal trauma recovery and give us an in-depth look at "stage 1." She'll also be telling us a bit about an awesome new resource she's created for partner support, A Door of Hope. 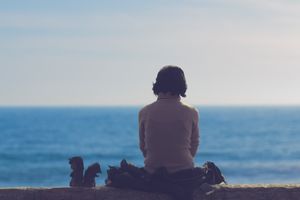