Why is it, in this heartbreaking business of sexual addiction that we feel more deeply betrayed when we discover our partner has been acting out with another man, rather than with another woman?

There are several answers to the question. The first has to do with our own attitudes towards homosexuality; we don’t yet see clearly what it actually is. We have made it worse than other “sins” because we think God sees it that way. So we feel more deeply shamed and degraded by it.

The second answer is that the feeling of deeper betrayal is totally on track. Masculinity and femininity lie at the heart of what we are and are meant to be joined in one. We see it in the passionate devotion of Jesus Christ to his bride — which earthly marriage is intended to reflect. So the further away from this model (echoed at another level in the union of male and female) we move, the more deeply we betray and are betrayed. So, yes it feels like a double betrayal and is. Not only has he sexually betrayed me, but he doesn’t even want a woman and I am a woman.

I want to tease these two answers apart over the next couple of weeks.

To answer the first: God has infinite compassion for us all. We are the product of a world alienated from the love of God and reeling from the impact of our brokenness and isolation and useless attempts to heal ourselves. Some of us are more broken than others but we have this in common. We are all helplessly dependent on our Rescuer. And our Rescuer, when He comes with a face shining like the sun and a smile as wide as the sky to pluck us out and restore us, makes no distinction between a homosexual and a heterosexual, or a murderer and a thief. We do, but he doesn’t.

We get a glimpse of this even in the Old Testament. The word used to describe homosexuality is a Hebrew word, toebah, which means "abomination." Yes, homosexuality is an abomination. But numerous other behaviours are also described as toebah. Here are some of them: partiality, pride, lying, creating discord, hypocritical prayers, love of money, failure to honour agreements and keep promises, lending at excessive interest — and the list goes on.

In the New Testament the theme continues: homosexuality shows up in a list of other common sins including envy, malice, gossip, boasting and slander. It typically appears alongside “heterosexual” adultery and fornication. Interestingly the word “perversion”, often used to described homosexuality, is a mistranslation. The Greek word is plane, simply meaning "to err" or "stray." If it means perversion, then the scripture, “You are in error (plane) because you do not know the scriptures,” would turn us all into perverts. And it is helpful to realise that Sodom was not destroyed solely because of homosexuality. Ezekiel 16:49-50 makes that clear.

Homosexuality is just a symptom — the outcome of a variable set of deep-seated insecurities that affect gender identity and leave someone hungry for it — but through another human being who appears to have the indefinable something we think we need. The chemistry is complex, but once sex is substituted for love then acting out and addictive patterns begin. What we can be sure about is that it is not biologically imprinted. Depending on the degree of gender insecurity we get exclusive homosexuality or bisexuality.

So God doesn’t see homosexuality the way the conservative church has been taught to see it — as a sin worse than many others. Craving for Love gives a much fuller account of what causes classic homosexuality, and understanding something of the causes helps us move out of a generally judgmental framework that may contribute to our difficulty handling it in a partner.

One of the important things an understanding of causes can also do is to help us realise that we as wives are not the cause of our husband’s homosexuality or bisexuality and nor are we its cure. It preceded us by years and we are not to take the blame for his lack of sexual interest in us.

Next week we'll finish off this series by looking at the "celibate marriage" — an issue for many wives of sex addicts, not just those married to men with SSA issues.

Enjoy this video from my favorite indy band, Rivers & Robots, from their new album Eternal Son 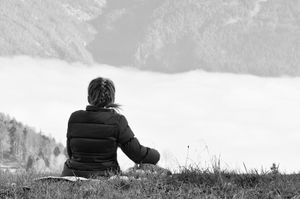 Sex Addiction and the God Who Heals