“If a house is divided against itself, that house cannot stand.”— Mark 3:25

My wife, Ella, and I have been facilitating couples' intensives since 2011. For addicts who are taking recovery seriously and partners who have somehow found it in their hearts to give him another chance, this can be a profound experience. A couple's intensive involves three days of intense counseling, coaching, and experiential exercises to help a couple whose marriage has been jolted by sex addiction find healing.

On the second day I ask both the husband and wife to allow themselves to be really vulnerable. I direct them to close their eyes and envision a time in the future five or ten years from now. I tell them they can make that day look like anything they want. I ask them to think about where they are, what it looks like, who they are with, and what they are doing. With their defenses down the tears begin to flow.

I ask them to consider sharing that vision of the future with us. Over the years, I’ve heard many wonderful ideas and visions unique to each person, marriage and family. People share things they hadn’t felt safe to think of in years. It’s wonderful. Until they open their eyes and reality slaps them in the face.

I don’t do this exercise to fill couples with false hope. I do it to illustrate that each partner is on the same page. That they want the same thing. One of the first things I want guys that I’m working with to understand is, "your wife is not your enemy!" It hurts my heart to see how many of them really believe the woman they married and vowed to cherish in good times and in bad is against them. This is the same individual who desperately wants to rebuild trust but is unwilling to extend any to his partner.

I say to the guys, “I understand that she’s thrown you out, cursed you out, and maybe even punched you out. And sure she has said and done many things that could easily be construed as hypervigilant, controlling, vindictive, or downright mean. Guys, get this through your head. Your wife doesn’t want to be this way anymore that you want her to. It’s not a choice, it’s a reaction.”

Growing up I wasn’t well versed in scripture. Most of my adult life I made a conscious decision to avoid what I was sure to be mountains of shaming bible passages. It wasn’t until I entered recovery, when I slammed into my rock bottom at terminal velocity that I decided to give it a try. I was shocked to discover that sexual addiction/ sexual immorality is really nothing new. The enemy has been using his lust-filled bag of tricks to ensnare men for eons. Don’t believe me? Pick up your bible and read about King David, Solomon, or Samson. A man after God’s own heart, the wisest man in the world, and the strongest man ever, all fell into sexual immorality. It’s the oldest trick in the book and we are falling for it hook, line, and sinker.

Understanding that you and your wife are on the same team makes recovery easier. This is true for the addict, the partner, and for the marriage. Forget what you’ve heard about the imaginary street that exists where each of you have taken up residence on opposite sides and are waiting for one another to clean up their respective junk. This ridiculous idea suggests that somehow when both of you get “healthy” you will reunite and live happily ever after. A couple of problems exist with this metaphor. First, if you are on one side and your spouse is on the other you are on opposite sides paralleling each other… not connecting. Second, your marriage will not stop for either of you to get healthy. More deception.

Here’s a healthy dose of truth. Anger is not the opposite of love. The opposite of love is apathy. This isn’t an original thought, Dr. Doug Weiss speaks at length about it is in his video “Helping her Heal.” It’s a tremendous resource that I would recommend for any married man in recovery. Highlighting the truth is an important aspect of recovery. If your wife hasn’t divorced you, or worse, after discovering your sexual betrayal consider yourself blessed. In truth it’s what we all deserve. That’s harsh but true. In fact when I ask men to write about how they would react if the tables were turned I often hear things like, “I would leave,” or “I wouldn’t be able to handle it.” Think about it, what would you do?

If your wife has made the unpopular (in many circles) choice to stay, she is a rock star! Rejoice! Most importantly match her effort. Don’t waste time trying to theorize why she would go out on a limb with no guarantees in the face to overwhelming evidence that she might get hurt again. Don’t go back in time to gather evidence as to why you don’t deserve another chance. Don’t catastrophize the future and formulate a list of reasons it will never work. Most importantly don’t allow some of the things she might say out of hurt to override the truth about this one incredible action. Remember hurt people, hurt people. Your actions hurt her and she desperately needs you to understand that.

Next week we continue with more thoughts from Jeff on, "She's Not the Enemy."

Jeff Hutchinson is a professional Life Coach and Certified Pastoral Sexual Addiction Specialist. Jeff has been married since 1999 to an amazing woman full of beauty, strength, and grace. He is a father to two wonderful children, an adult son and teenaged daughter. Jeff is retired from the U.S. Army after over twenty years of service. Jeff's story is a testament to the power of Christ to release a person from the bondages of addiction. He coaches men who struggle with pornography and other sexually compulsive behavior to find sexual purity in their lives, their marriages, and in their minds. She's Not the Enemy: Conclusion 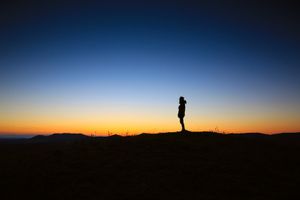