Stinkin' Thinkin'... on Sex after Betrayal

Over the next two weeks we continue the stinkin’ thinkin’ (in church and society) series with a look at what we’re being told about our sexual “duty” to a husband with a sex addiction. Jane Howcroft looked at this issue from a biblical perspective a couple of weeks ago. Today, I’d like to look at it as well from the perspective of what we know about porn/sex addiction.

In the blog post that launched this series, “transformed wife” wrote:
A wife should absolutely make it one of her highest priorities to keep her husband 100% sexually satisfied at all times…. Failing to do your duty, will make your husband’s life much more difficult.

By the time our husband is addicted (or even if he’s like my pre-recovery husband a once/month user), it’s not a craving for marital sex he’s having, it’s a craving for the high one gets through novelty, through perversion, through danger — i.e., sex which is the opposite of marital intimacy.

Many wives of sex addicts have shared testimonies of how they tried to give their husband this type of high, i.e. how they tried to compete with porn, only to realize that real women, no matter how “hot,” will always lose over images. Shelley Martinkus talks about this in her excellent workbook, Rescued, Deearn talks about this in one of our blog posts from last year entitled His Addiction: My Fault?. What Shelley, Deearn and many others have learned the hard way is that they were only deepening the neural pathways of their husband’s addiction by becoming (in the word’s of Jason Martinkus), his “personal prostitute.” They were actually increasing the likelihood that their husband would, before long, go looking elsewhere for his next neurochemical hit.

Said one survey respondent:
About five years into our marriage (15 years ago), I initiated sex with him and he yelled at me "I feel pressure from you about sex!" These were my thoughts at that time: "I am not being a submitting wife. I need to stop initiating." As a result, we have not had sex since.

How dare anyone accuse such women of not having done their "duty"... of suggesting they are responsible for their husband's sexual sin. Most women in this situation have had their own "tooth and nail" fight — to live a pure life in the context of a celibate, loveless marriage. These women should be supported and honored, not insulted and blamed.

How come? She was always available! The answer: there just isn't enough sex in the world to fill a God-sized hole.

Next week, I'll discuss the lie—that came up in the same blog post that said to "remember grace" — that if he's entered recovery THEN we definitely have to be having sex with him.

We are hard pressed on every side, but not crushed; perplexed, but not in despair... 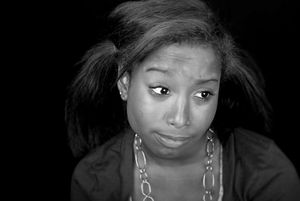